I’m pretty amped up, and I’m also really sore.  Amped because yesterday was the 100th “Board Meeting” since I started this endeavor, and it was a really fun session.  Sore because my nearly 30-year-old body had an encounter with the concrete, facilitated by gravity.

My brother just wrapped up a contract for his last job and has some extended time off, I had been looking forward to his visit for a few weeks now.  This whole board meeting idea started after a conversation with him, so it was really cool to go to the park together for the 100th one!

Our buddy Mark met us there as well, donning his newest Craigslist deal… a used BMX bike.  We had ourselves a mini-crew, and being with friends sent my confidence at the park to new heights.

After rolling around a bit, Steve got his camera out and we started dicking around on a wall-ride feature.  Didn’t make any of the handplant tries we were doing but got some good shots nonetheless! 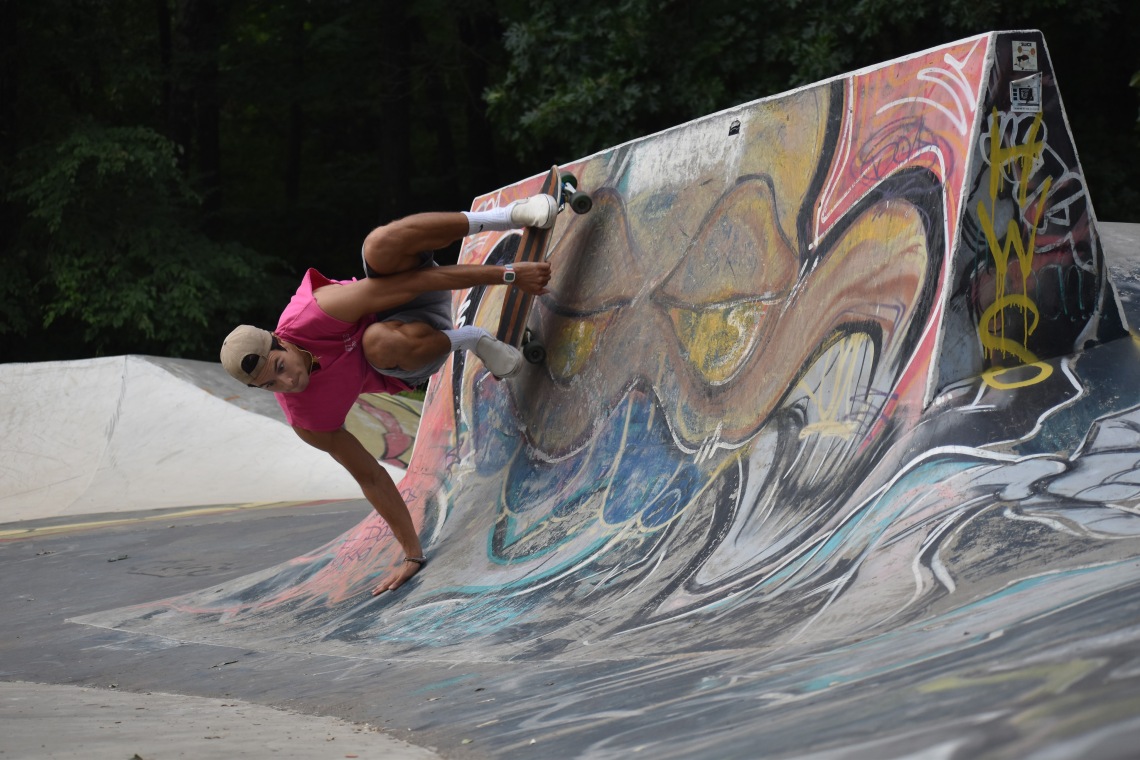 Afterward, we moved to the bowl for some carving.  It’s super fun to actually have my line linked up and work on it, and I was getting higher up on the walls than I’ve ever been before.  Steve got some awesome photos as well. 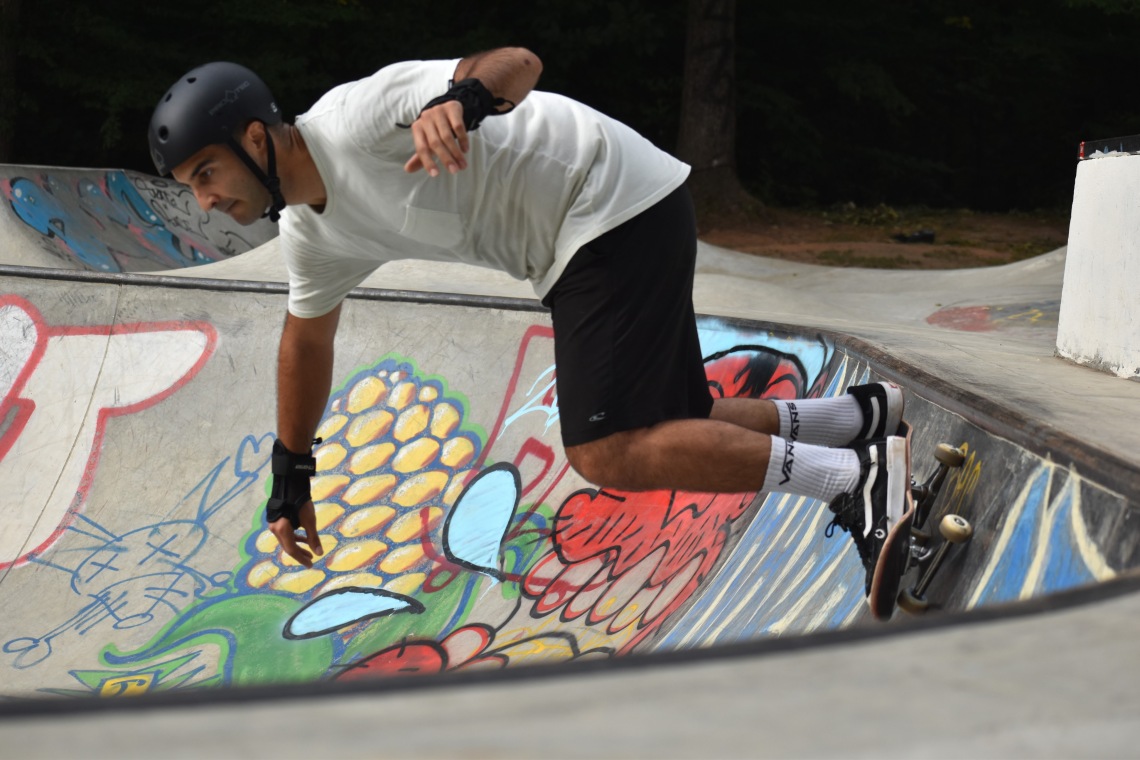 Steve had a go in the bowl too and quickly got the hang of it.  As we carved around, Mark was on a mission to find a wrench.  The chain kept falling off of his $100 bicycle.  After some time, he got it on there and started cruising around a bit, psyched on his new purchase. 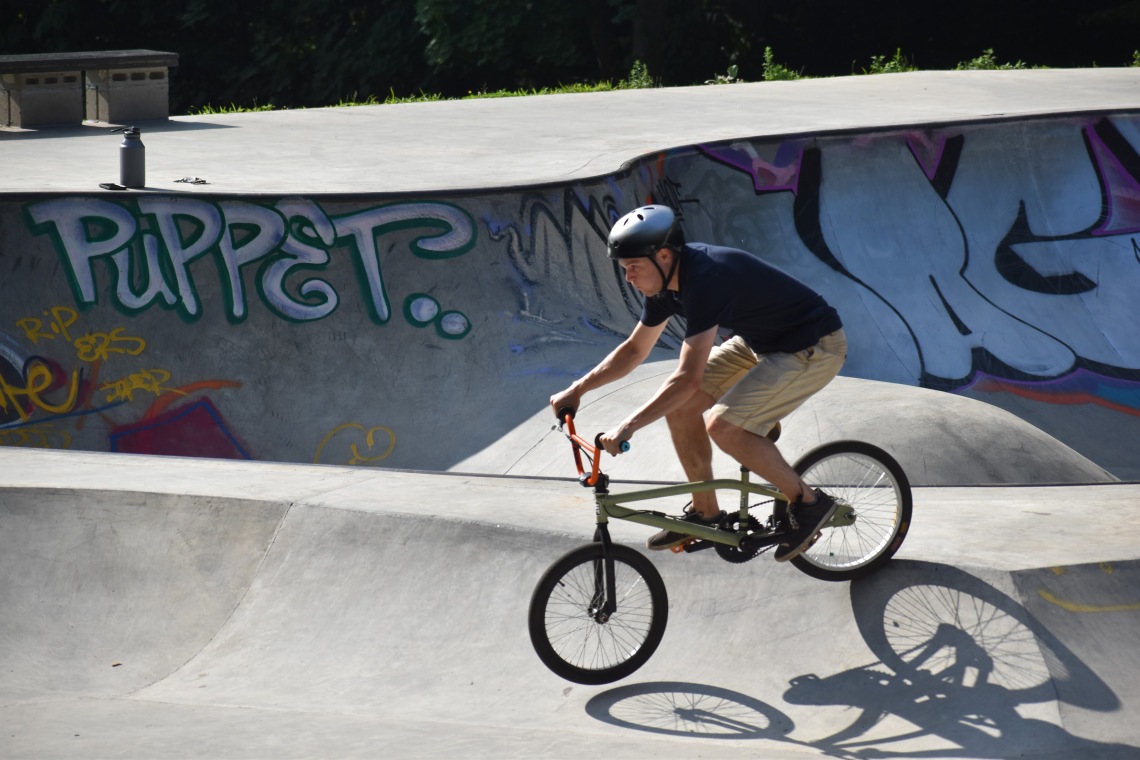 We had a ton of fun.  Smiles and laughs all around.  After a quick break, we wanted to try some slo-mo shots on Steve’s new GoPro.  We were geeking out at the fact that it shoots in 240 fps.

With my newfound confidence, I practiced a few heelflips and was ready to try one in front of the lens. Like a moron, I neglected to put my wrist pads back on so I could “look cool” for the camera.

The good news is that I came even closer to landing a heelflip!  The bad news is that my right, upper extremity is in rough shape.  At first, I thought it was my wrist that took on the most damage.  However a few hours later my shoulder started acting up, and this morning it’s pretty stiff.

I’m no doctor, but I’m an expert Googler.  My self-diagnosis:

So, I’m going to stay off the board for a day or two for some RICE action.  The heelflip goal will take a hiatus.  I’ll probably do some mellow surfskate and longboard cruising this week instead.  Keep the wheels on the ground while rebuilding confidence.